Progressive philanthropists now regularly admit to politicized charitable contributions. But to our knowledge, no one recently has examined how professional philanthropic elites—those who work at the nation’s largest foundations—spend their personal political dollars. The last such analysis, we believe, was conducted in 2008 by the Center for Responsive Politics for The Chronicle of Philanthropy.

So we looked. Employees of those foundations in the “FoundationMark 15” made a total of about $832,000 in contributions that are reported to the Federal Election Commission (FEC) during the 2019-20 election cycle. Of that, 96.9% supported Democrats, while just 1.7% supported Republicans.

Specifically, they contributed $806,534 to Democratic candidates, related political action committees, or other entities during the ’19-20 cycle, according to FEC data, with only $14,121 going to GOP-related candidates or PACs.

In some cases, employees supported political committees that in turn supported other candidates—sometimes supporting candidates on both sides of the political aisle. In those cases, the contributions were tracked proportionally. 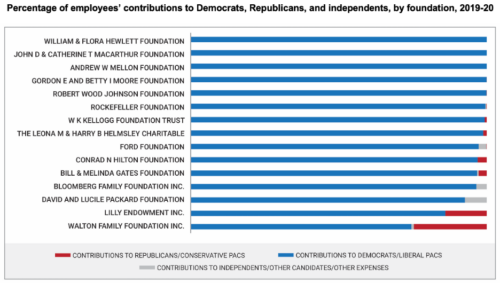 The document also contains the actual dollar amounts of employees’ contributions, by foundation, as compiled and computed by the Capital Research Center’s Jonathan McGee.

The Chronicle’s earlier analysis showed that 98% of reported political contributions made by employees of the wealthiest 25 foundations were to Democrats from January 2007 to August 2008.

This article originally appeared in the Giving Review on August 8, 2022.