While the Fed is still printing $120 billion a month and repressing short-term rates to near 0% in the most monstrously overstimulated economy.

The lowest lowball inflation measure that the US government releases, the PCE price index without food and energy rose by 3.64% in September, compared to a year ago, the hottest inflation reading since May 1991. 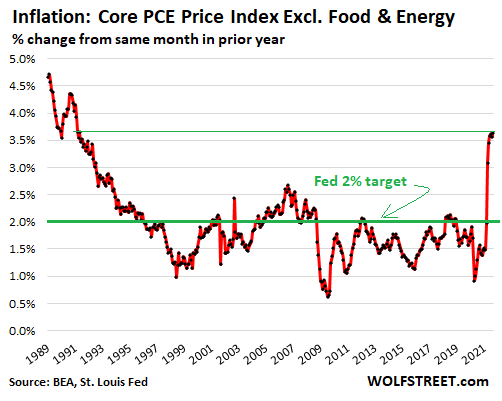 Food and energy, precisely what regular people spend a lot of their money on, are excluded from the Fed’s inflation measure because prices of food and energy jump up and down a lot and create even more volatility in the inflation index.

The close-up of core PCE, covering the past 10 years, shows a little more closely what is happening on a year-over-year basis. 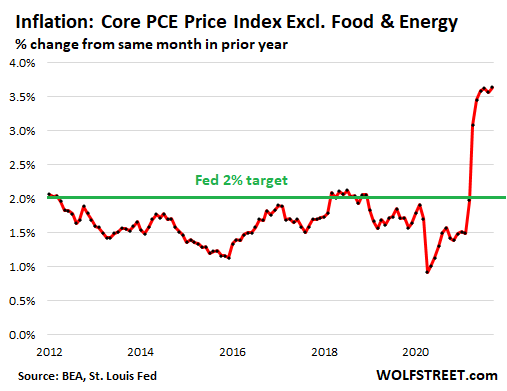 On a month-to-month basis, the core PCE index rose 0.21%, according to the Bureau of Economic Analysis today. Month-to-month readings are volatile. But when they’re bunched together in a long-term view, the dynamics emerge. Note the volatility in the 1970s, as inflation was rising, leading to year-over-year core PCE to exceed 10% in early 1975 and 9% in 1980. In between there were years paved with false hopes that this thing would go away on its own, but it didn’t, and interest rates were far higher already, and the Fed wasn’t doing QE: 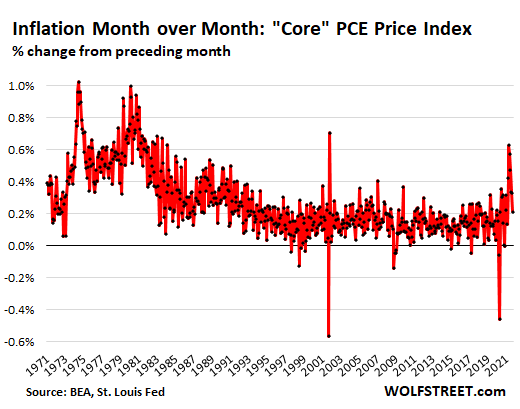