QE creates money. QT does the opposite: it destroys money.

Total assets on the Fed’s weekly balance sheet as of July 6, released this afternoon, fell by $22 billion from the prior week, and by $74 billion from the peak in April, to $8.89 trillion, the lowest since February 9, as the Fed’s quantitative tightening (QT) has kicked off. The zigzag pattern is due to the peculiar nature of Mortgage Backed Securities (MBS) that we’ll get to in a moment. 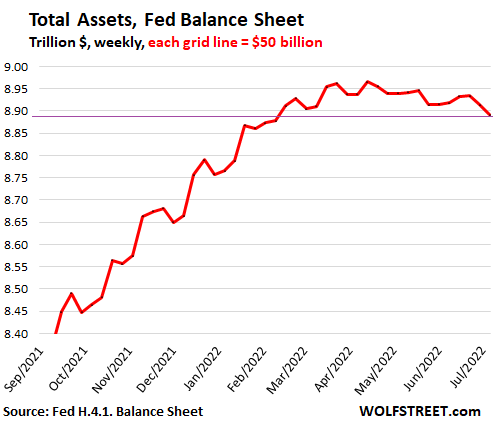 Treasury securities fell by $20 billion for the week, and by $27 billion from peak.

Run-offs: twice a month. Treasury notes and bonds mature mid-month and end of the month, which is when they come off the Fed’s balance sheet, which in June was June 15th and June 30th.

Tightening deniers. Last week’s balance sheet was as of June 29 and didn’t include the June 30th run-off. However, the army of tightening-deniers trolling the internet and social media doesn’t know that, and so a week ago, they fanned out and announced that the Fed had already ended QT, or was backtracking on it because Treasuries hadn’t dropped in two weeks, which was hilarious. Or more sinister: hedge funds manipulating markets through their minions.

No TIPS matured in June. But next week, July 15, TIPS with an original face value of $9.6 billion-plus $2.5 billion in inflation compensation will mature, for a total of $12.1 billion, that the Fed will get paid. After that, the next maturity of TIPS on the Fed’s balance sheet is on January 15, 2023. And the TIPS balance will increase from July 15 through January 15 due to inflation compensation. 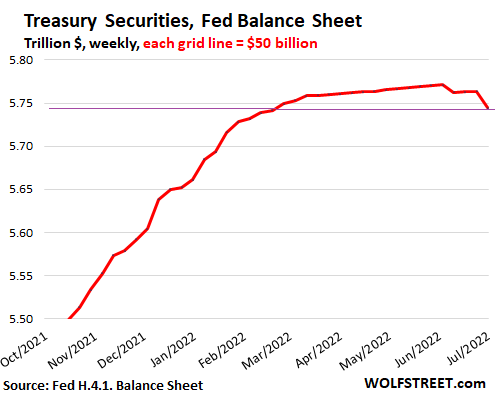 MBS fell by $31 billion from the peak.

Purchases in the TBA market and delayed settlement. During QE, and to a much lesser extent during the taper, and to a minuscule extent now, the Fed tries to keep the balance of MBS from shrinking too fast by buying MBS in the “To Be Announced” (TBA) market. But purchases in the TBA market take one to three months to settle. The Fed books its trades after they settle. So the purchases included in any balance sheet were made one to three months earlier.

This delay is why it takes months for MBS balance to reflect the Fed’s current purchases. The purchases we see show up on the balance sheet in June were made somewhere around March and April.

And these purchases are not aligned with the pass-through principal payments that the Fed receives. This misalignment creates the ups and downs of the MBS balance, that also carries through to the overall balance sheet.

In addition, MBS may also get called by the issuer (such as Fannie Mae) when the principal balance has shrunk so much that it’s not worth maintaining the MBS (the issuer then repackages the remaining underlying mortgages into new MBS).

Tightening deniers. So when the tightening-deniers – including a hedge-fund guy with a big Twitter following – trolled the internet and the social media about QT not happening because MBS balance ticked up by $1.2 billion on the June 23 balance sheet, they got tangled up in their own underwear. The following week, the MBS balance fell by $19.5 billion. That’s how MBS on the Fed’s balance sheet work. These folks just didn’t know, or more insidiously, tried to manipulate the markets…..

ADVERTISEMENT
The Courage to Dissent…From the Left