Everything is on ice. But when forbearance ends, forced sellers or lenders will put millions of these homes on the market.

On the other side of the red-hot housing market, a historic delinquency problem has been fermenting since last spring, largely put on ice and on hold by forbearance programs, waiting to be dealt with. The Federal Housing Administration (FHA) which insures nearly 8 million high-risk mortgages, reported that the delinquency rate of its mortgages rose to 17.5% in February, up from 17.0% in January, matching the all-time records of September and November last year, according to the AEI’s Housing Center.

“Low down payments, low closing costs, and easy credit qualifying,” the FHA promises. So FHA mortgages always have high delinquency rates, even during the Good Times, when they were already rising. But during the Pandemic, delinquencies ballooned, and they’re not improving in any way despite the improving economy: 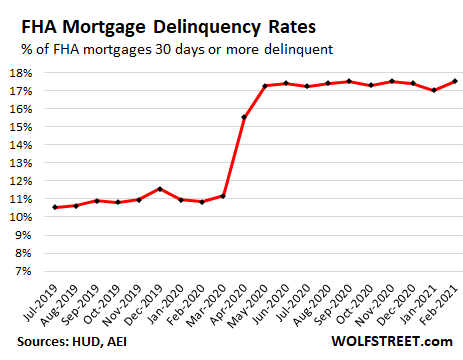 The delinquency rate for the largest 169 Metropolitan Statistical Areas (MSAs), rather than the US overall, accounting for about 6 million of FHA mortgages, rose to 17.9%.

And when forbearance ends?

Rumors of perma-forbearance are now floating around, given the multiple extensions of the forbearance programs that no one has any political appetite to let expire. But those are just rumors. Eventually, those programs will end, and then the delinquent mortgages will have to be dealt with.

Borrowers who can do so will resume making payments, either with the missed principal and interest added to the end of the mortgage or with the lender agreeing to modify the mortgage. This would cure the delinquency and bring the mortgage current.

Given the massive surge in home prices, a sale would be a logical solution for these borrowers who cannot make the payments. They might even walk away with a little extra cash.

But in markets with a large concentration of delinquent FHA mortgages, this would unleash a flood of homes coming on the market – and it would instantly cure, and more than cure, the inventory shortage now being lamented, and when large enough, the sudden supply of homes for sale would send bigger ripple effects through the market.

To read the rest of this article, click here, and go to Wolf Street.