In line with our promise to provide more guidance and opinions on personal finance,  the following is offered as our take on what 2023 will likely provide for investors. We hope to provide a little theory to develop your thinking and some actionable ideas. Keep in mind this is for educational and entertainment purposes only. Always do your own research and/or consult with a qualified financial professional before investing in anything.

Last year we suggested that it would be a risk-off year. We suggested that both stocks and bonds would have bear markets and the standard 60% stock, 40% portfolio, typically recommended for retired people, would fail.

Boy, did it ever. According to a chart created by the Financial Times, it was the worst year for both asset classes combined since 1871! Ouch! 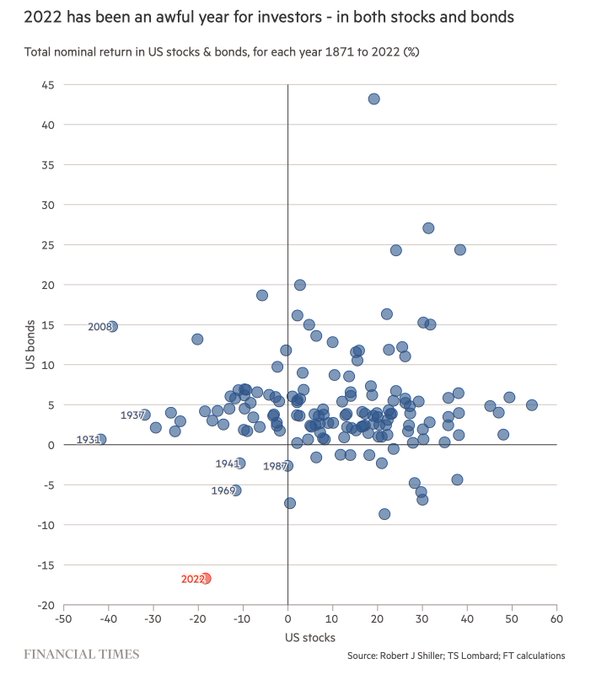 Other sectors of the market that caught the public fancy, like cryptocurrencies, lost 70% of their value or more. The bloom not only came off the rose, but the rose proved poisonous.

Jason Goepfert at sentimentrader.com also determined that those who bought dips or rallies also fared poorly with the worst results since 1928. It was just a very difficult year.

Gold moved essentially sideways, which allowed it to outperform most other asset classes.  Oddly though, western investors continued to sell holding out of ETFs, while central banks were the biggest buyers since 1968, just before the collapse of Bretton-Woods. What do they know that we don’t?

In general, the whole of 2022 could be described as the year where all components of the “everything bubble” began to deflate. It was and remains a financial asset bubble of immense proportions blown up by years of easy money from the central bank and massive and irresponsible fiscal stimulus. It started to buckle under the weight of rising interest rates triggered by the worst inflation in 40 years.

Thus, this is not a natural market phenomenon, but rather a crisis with political origin. It is not a market error, it is a central planning error committed by politicians and the FED.

Not surprisingly, with such outsized influence, what the FED does in 2023 will likely prove determinative.

While the current market is oversold and likely to rally early in the new year, we doubt it can sustain gains in light of further increases in interest rates and the inevitable decline in earnings.

Many of the factors causing this unwind of the everything bubble, primarily the rapid rise in interest rates engineered by the FED, will continue to be important factors in the coming year. But we suspect returns for bonds will first improve substantially once rates peak to be followed by an equity rally later in the year. However, this improvement is more likely towards the second half of 2023, with the first half being rather brutal for equities.

History does not always repeat, but past business cycles show that stocks do not bottom until after the FED pivots to lowering interest rates. Even that does not guarantee a positive move in stocks since the reasons the FED will eventually cut (poor business conditions) can adversely influence both corporate earnings and debt quality.

Also, valuations usually have to get cheap before a bottom for equities is found.  In that regard, we are still not in the inexpensive zone of market valuations.

We don’t know when that will be or at what level it will be, nor does anyone else.  Almost all the major brokerage houses predicted this time last year the S&P would be near 5000. Instead, we closed out 2022 near 3800 on the S&P. However, we would be interested in equities if the S&P index were to get around 3,000. We don’t know if it will hit that. However, if it does, it would command our attention.

Inflation should start moderating soon. The housing component is about one-third of the CPI index and housing statistics indicate sharp weakness in this sector. The money supply is also actually contracting now. However, that simply means inflation will moderate. We doubt we will hit the 2% FED inflation target level anytime soon, absent a bone-crushing recession. 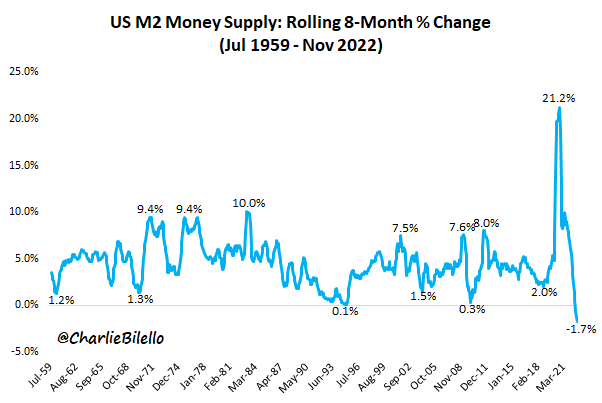 A housing bust will almost certainly curtail consumer demand, not just for things like appliances and furnishings, but other things as well. The reason is a house is the biggest source of wealth for most families and when housing prices start to fall consumers both feel, and actually are, poorer than before. Sprinkle in some rising unemployment anxiety and consumers will likely pull in their financial horns in the first half of next year.  That is important because consumer spending is 70% of the GDP.

The debate about whether we are in a recession will likely be over by summer with the recession advocates fully vindicated.

So the good news is inflation for a while will moderate.  The bad news is it will be for the wrong reasons.

What investments could be used under the circumstances described?  We would say bonds would be the first beneficiaries.

Most investors purchase bonds to diversify their risk and get hopefully some cash flow.  But bonds can at times be vehicles for capital gains.

To understand why you need to understand the concept of duration.  Duration is basically a mathematical calculation that involves the coupon cash flow generated and the length of the bond to its final maturity date.

The bonds with the longest duration ( the longest maturity and the lowest coupon) are the bonds that will change the most in price given any change in interest rates.

Timing as always will be important, but if you can buy long-duration high-quality bonds (like the 30-year US Treasury bond) near the coming peak in rates, you stand to make good money once rates begin to fall.  When rates near the bottom, we would sell since the US Treasury is not in good financial shape long term. In that sense, this is an intermediate-term trading idea, not a long-term buy-and-hold idea.

In short, buying bonds will likely be the best trade for the first half of the year if you can buy right near the peak in interest rates.  In a sense, stocks are not likely to do well until bonds have done well first.  Rates will have to peak and start to fall for either to work but bonds have just one variable, the direction of interest rates.  Stock prices are influenced by rates as well but also a host of other variables.

Your financial adviser should be consulted to see if such a strategy applies to your own circumstances and to get his or her ideas on the subject.

For those who manage their own funds, investigate Vanguard Extended Duration Treasury EDV, Pimco Long term Zero coupon (ZROZ), and TLT as possible vehicles to develop a position for the eventual reversal of FED interest rate policy.

The ultimate leverage to exploit a drop in rates are the longest bonds available with the lowest (can’t get lower than zero) interest coupon. Hence, the zero coupon bond idea.

This trade may also act as a strategy to deal with uncertainty. If paired with gold, the investor is hedged against inflation, possible deflation, and rising default risk.

There is also a risk of FED policy error.  They recently misplayed inflation badly.  Now they desire to reestablish their credibility.  They are pressing rates higher with the yield curve already badly inverted (short rates higher than long rates).  Yield curve inversion has about the best track record of smoking out a recession of any indicator that we have.  The Leading Economic Indicators have been down for 8 months. But the markets have been trained over the past 30 years to expect the FED to relent quickly as they did in late 2018.  The FED is concentrating on employment numbers, which are distorted by demographic factors and stimulus checks and thus may well overplay its hand.  If so, we could be looking at a hard landing, not a soft landing.