Margin debt issued warnings starting in early 2021 that the Big S would hit the fan. Folks blew it off.

Editors’ Note: Wolf Richter makes a brief point about “securities-based lending” (SBL) that deserves some additional commentary. This has been all the craze at major brokerage houses, which encourage both advisors and clients to use their stock portfolio as collateral for non-securities purchases. In most cases, this has been for real estate; spec homes, second homes, and rental homes. The problem is that this area gets little rigorous reporting, so it is not clear how exposed are the brokerage houses or the public. If both real estate and stock prices were to decline together (not unusual in a recession), investors may be forced to liquidate their stock portfolios to protect their real estate or sell their real estate to protect their stock portfolio. If the value of a stock portfolio declines to where the collateral value of the stocks for the SBL  falls to the level near the value of the loan, stocks have to be liquidated just as in a conventional margin call. This can lead to crash-like conditions where there is forced selling.  Since securities are much more liquid than real estate, usually they get sold first. We live in a highly leveraged world where many strategies made sense in an environment of both plentiful and ultra-cheap money. The problem is the ultra-cheap money is obviously being taken away by the Federal Reserve. It is likely we had record high SBL debt as well as margin debt.

Margin debt – the visible tip of the iceberg of the direction of overall stock-market leverage – dropped by $20 billion in May from April to $753 billion, according to Finra, based on reports from its member brokers. Margin debt had peaked in October 2021 at $936 billion, and began to decline in November 2021.

The Nasdaq peaked in mid-November as margin debt began to unwind and has since plunged 33%. The S&P 500 peaked on the first trading day in January, as margin debt was beginning to plunge. And the S&P 500 has since then dropped 22%.

In the seven months since the peak in October, margin debt has dropped by $183 billion, or by 20%, from the gigantic levels last year, an indicator of the turmoil in the market, but also an indicator that leverage is still extremely high and has a long way to go: 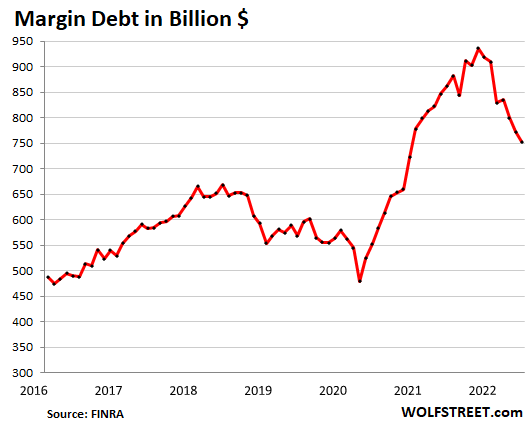 Sharp increases in margin debt are associated with increases in stock prices because leverage creates buying pressure with borrowed money; but then the tables turn, and in a vicious mechanism that includes margin calls, major stock market events are associated with sharp declines in leverage. Margin debt can serve as an effective warning about issues in the stock market.

The absolute amount of leverage in the stock market, across all forms of leverage, is unknown and no one tracks it. Margin debt reported by brokers is the only form of stock-market leverage that is tracked and reported on a monthly basis.

Another form of stock market leverage, Securities Based Lending (SBL), is sporadically and partially reported by banks on their annual reports or their quarterly reports. Some banks give amounts, other banks lump it in with other forms of lending. There is no total metric for the amounts of SBL across all banks.

Other forms of stock-market leverage include hedge funds and family offices that are leveraged at the institutional level. This is not tracked either. They do get margin calls, and every now and then, one of them collapses. It’s only then, when creditors pick through the debris, that the world discovers how much leverage there was.

Other forms of leverage include stock-based derivative products, such as those that felled the family office Archegos in March 2021, wiping out billions of dollars in capital at the prime brokers that had provided the leverage. No one tracked this leverage. Apparently not even banks and brokers that funded it knew at the time how much total leverage their client had from all brokers combined.

Brutal collapses of hype-and-hoopla stocks that get chopped down 80% or 90% in a matter of months trigger forced selling amid the margined crowd that was planning to get rich quick on those stocks and that therefore had concentrated holdings of these stocks. Hundreds of stocks have collapsed, starting in February 2021, and I’ve documented some of them in my Imploded Stocks.

Here are some well-known names whose share prices have collapsed. There are many more lesser-known names out there, including the EV SPAC, Electric Last Mile, that already announced that its stock will go to zero and die as it will file for Chapter 7 bankruptcy liquidation one year after going public.

Now imagine the margin calls these collapses triggered (percentages from their highs through June 14 mid-day):

These stocks plunged from ridiculous highs that many folks had assumed would lead to even more ridiculous highs, which was why they bought them in the first place. As the shares collapsed, leveraged investors had to reduce their margin debt because collateral values vanished, and they became forced sellers.

Leveraged investors with a concentration in these stocks could get completely wiped out, with their brokerage account balance reduced to near nothing, if they didn’t dump these instruments in time.

Even some of the biggest stocks plunged far enough to have triggered forced selling among margined investors (percentages from their highs through June 14 mid-day):