And companies have been reporting that they’re able to pass on those surging costs. So here we go with inflation.

Inflation that producers are experiencing is now blowing out. The surging input costs and the ability to pass on those higher input costs that have been reported by company executives as part of the services PMIs [Purchase Managers’ Index] and manufacturing PMIs, and that owners of small businesses have told me about for months, have now solidly fired up the Producer Price Index for final demand, which in March jumped by 1.0% from February – double the rate that economists polled by Reuters had forecast – after having jumped 0.5% in February, and 1.3% in January. The PPI has now taken off, after hovering in fairly benign territory last year.

Compared to March last year, the PPI jumped by 4.2%, the sharpest year-over-year increase since 2011, according to the Bureau of Labor Statistics today. Note the surge over the past three months (data via YCharts): 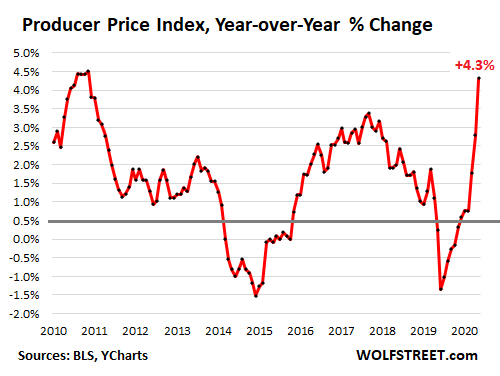 The “Base Effect” that I discussed yesterday can be blamed for only a portion of the year-over-year increase. A big part of the base effect is going to come in April.

The PPI hit a high in January 2020 with an index value of 119.2. In February and March last year, it dropped 0.5% from the prior month, and in April it plunged 1.1% to an index value of 116.7, driven by the collapse in fuel prices. And that was it in terms of declines. It has been rising ever since (data via YCharts): 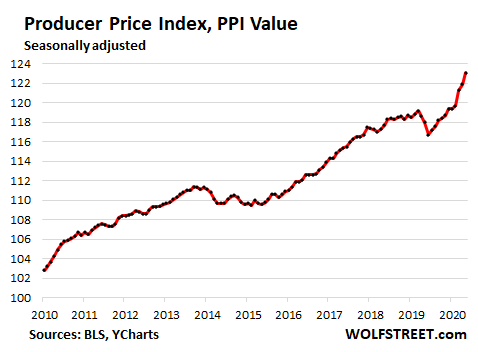 What might April look like? Today’s index value at 123.1 is already 5.5% higher than that of April last year. If the PPI rises 0.5% in April from today’s level, it would make for a 6% year-over-year increase, the highest since the index was started in November 2009. And this would include the full brunt of the base effect.