The June sell-off did a job on them.

Manhattan luxury real estate vs. stock market downward spiral in June: In the week through June 19, only 12 sales contracts were signed for condos, co-ops, and townhouses with asking prices of $4 million and above, the worst week since the week of December 28, 2020 (with 10 contracts), according to today’s weekly report by Olshan Realty. 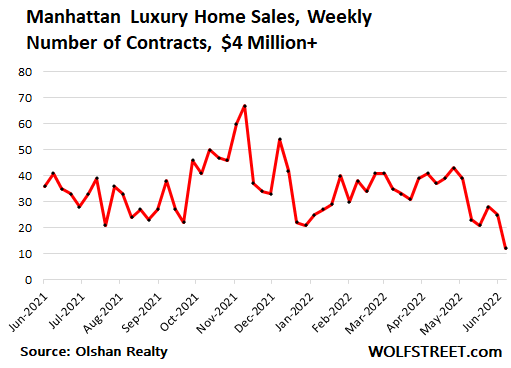 There have been other reports on this phenomenon – though not quite as real-time-ish and as brutal: What is pulling the rug out from under luxury real estate isn’t necessarily the spike in mortgage rates – though that can play a role too by massively boosting the carrying costs of luxury real estate – but the plunge in stock prices that is throwing all kinds of previously taken-for-granted equations and feelings of wealth into uncertainty.

An analysis by Redfin, released earlier in June, found that sales of luxury homes – priced in the top 5% of the local market – during the three-month period through April across the US plunged by about 18% year over year — a much smaller drop than what is now occurring in Manhattan. But the Redfin report was for data only through April, and stocks have dropped quite a bit further since then.