Phoenix. Summerton. Chattanooga. Philadelphia. You may have seen these cities’ names sprayed across the morning headlines as the sites of the weekend “mass shootings,” as the media makes an all-out effort to push the Biden administration’s gun control agenda.

The activist media are pushing these incidents as a “string of shootings left at least 15 people dead and more than 60 others wounded in eight states this weekend,” as NPR put it. The public-funded news source notes only the mass shootings last month in Buffalo, N.Y., which was carried out by an apparently racist 18-year-old suspect who described himself as a “mild-moderate authoritarian leftist,” and the deadly school mass shooting in Uvalde, Texas.

The media’s implication is clear: There is a bright red line that can be drawn between last month’s “mass shootings” and the gun violence that broke out this weekend — as it does on many weekends in large U.S. cities.

But there are a number of problematic facts about the weekend shootings. There are few publicly identified suspects, and thus, it is difficult to rule out if the shootings were gang-related or domestic violence-related. In addition, not all of the events fall into “mass shootings” under the most technical stipulations, since the most stringent databases that follow historical standards qualify that there must be ‘3 or more’ or ‘4 or more’ people killed (Mother Jones and The Violence Project, respectively).

As the media’s ‘mission creep’ has expanded in concert with the Democratic Party’s gun control agenda, so has the definitional inflation. Al Jazeera Labs has put together a useful chart to keep these definitions straight. The number of reported “mass shootings” in the U.S. can thus vary dramatically. In 2021, for example, there were either 6 mass shootings or 818 mass shootings, depending on the definition. 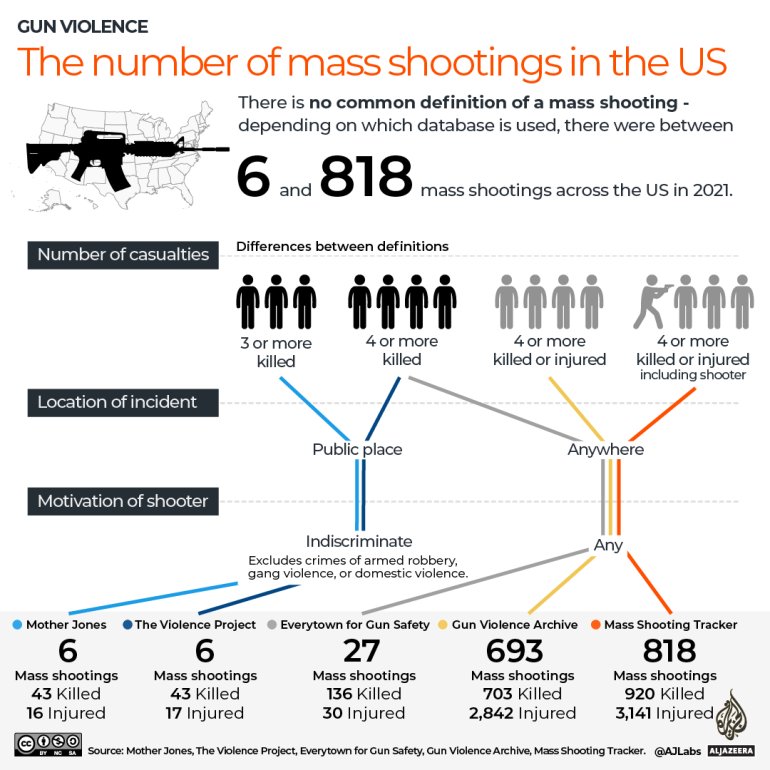 A brief review of the known facts about the “mass shootings” reported for this weekend demonstrates this definitional divergence (in data analysis, determining if a case qualifies as an event is known as ‘coding’). In Phoenix, there was one known fatality, but nine people were taken to the hospital with gunshot wounds. It would thus not qualify under the strict definitions.

In Summerton, South Carolina, eight people were shot, and one was killed, at a Saturday night graduation party. The police characterized the assault as a drive-by shooting that was likely a “gang-related incident.” It would also fail to qualify for multiple reasons.

In Chattanooga, there were three killed and 14 injured in gunfire at a nightclub in an attack carried out by “multiple shooters.” The shooting incident seems to bear the hallmarks of gang-related violence, therefore, it may not fit the bill as “indiscriminate.”

In Philadelphia, a city with strict gun control laws and a history of rampant gun violence, a street brawl turned into an exchange of gunfire that killed three people and injured twelve others. The police commissioner stated he did not know if the gunfire exchanged was “between a group of individuals, or if this was tied to another group or affiliation.” It bears the hallmarks of gang-related violence; but in any event, does not appear to fit the bill as “indiscriminate.”

ADVERTISEMENT
The bottom line is that every one of these weekend attacks would technically fail to meet the requirements as a “mass shooting” under the strict definitions. Nonetheless, public news sources like NPR continue to hype statistics such as the U.S. has “seen at least 246 mass shootings,” according to the Gun Violence Archive (defined above as “4 or more killed or injured” that could be “anywhere” for “any” reason), without providing context…..

Everyone Should Vote
Scroll to top