Editors’ Note: Debate over the budget and deficit spending has been a staple of American political debate since they became chronic with Lyndon Johnson and the Great Society. Too bad it has in recent years just become background noise for both political parties because the stakes for America are very high. However, as this article indicates, there is a time when the argument that “someday this is going to kill us” comes due. Unfortunately, because of demographics and their impact on entitlements, rising interest costs, war spending, and reckless social spending, the future is now – the present. This week, the fight over the debt ceiling begins and it will resurface in June. The Democrats have gotten a 30% increase in discretionary spending. Running a trillion-dollar deficit has now been normalized. Will the Republicans show the nerve necessary to curtail spending and set the nation on a course to avoid the inflationary/deflationary crisis described below? Moreover, it may be too late for any actions to avoid significant societal and economic pain. The debt ceiling fight basically is Democrat blackmail. Either accept all of our past excesses or we will shut the country down and blame the Republicans for the crisis. In the past, Republicans have allowed the framing of this crisis to make them look irresponsible and heartless as the last confrontation in 2011 demonstrated. Can Republican leadership find a way out of this blackmail trap? We are about to find out.

All dynamic systems have feedback loops, either negative or positive loops. For example, the sun heats the earth. Heat and humidity form clouds and push them higher with updrafts, which create rain and partially block sunlight, cooling the earth and providing moisture for another cycle. This is a negative feedback loop and is a mechanism in nature for the regulation or maintenance of a specific state of nature.

In comparison, many feedback loops in nature are self-reinforcing and are referred to as positive which tend to a definitive endpoint, such as the death of a living entity. We have a number of these operating in the economy right now related to Federal intervention in the economy. Not only have many become self re-inforcing, but they also intersect with other feedback loops creating even bigger positive feedback loops with serious negative consequences.

In the case of US government finance, we now have some feedback loops that are increasingly dangerous and out of control. This disequilibrium could also spread to foreign governments and the private sector as well.

Let’s take a look at some that are obvious and some not so obvious. 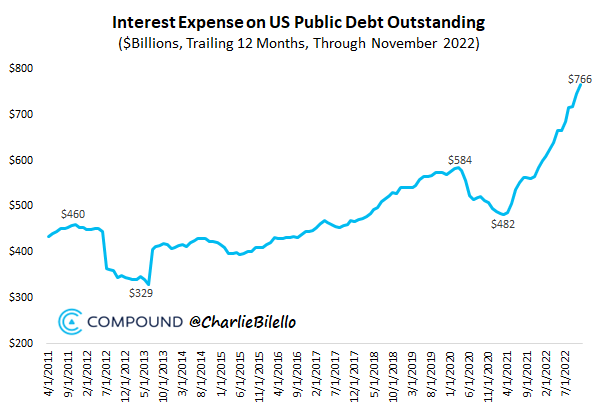 With a total deficit federal debt now over $31 trillion and growing, the cost of rolling over the US debt is rising because the debt pile to finance is both getting larger and the cost of interest payments is rising.  Both trends require more debt to be financed and the more debt that is offered to the markets, the lower the price of bonds and the higher interest rates will otherwise be unless there is offsetting demand for those bonds. The more money paid out to service the debt, the less money is left for the government to spend on other things. 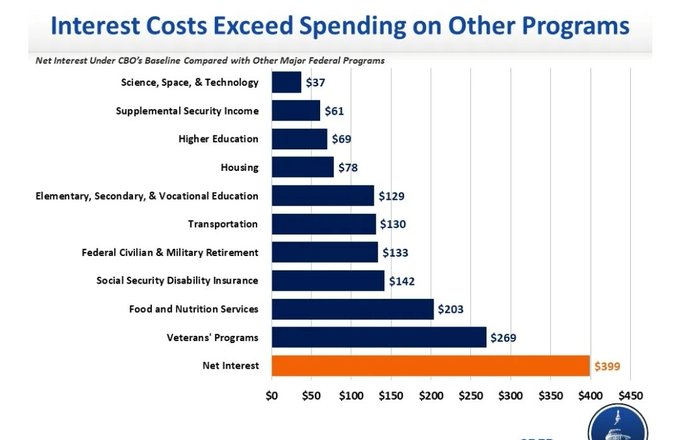 Thus, higher interest rates will help create higher rates, a self-feeding trend that some refer to as a doom loop.

You can sell more debt if there is more demand ready to take the increased supply. We don’t expect the government to go broke. They will be able to finance themselves. The question is at what interest rate will the government be completely funded and who else is damaged by the government’s voracious appetite for funds?

Unfortunately, some of the big buyers of bonds are publicly either pulling out of the market or becoming sellers. For example, the FED has expanded its balance sheet by buying huge quantities of bonds, but now the FED itself is a net seller as it reduces its holdings in an attempt to staunch inflation that it created. We have moved from Quantitative Easing (FED buys bonds) to Quantitative Tightening (FED sells bonds).

Big foreign buyers of US debt such as Japan, Saudi Arabia, and particularly China, are also cutting back on what they buy and, in some cases, have become net sellers as well. To make bonds attractive to buyers of any sort, they must pay a superior yield and the bondholder must feel secure that they will be paid in a currency that holds reasonable value.

Higher rates mean lower bond prices, so it hurts those institutions like pensions and insurance companies that already own bonds at higher prices. This is one of the reasons a typical 60% stocks and 40% bond portfolio last year delivered the worst results since 1871. The bond portion, which was supposed to “diversify”, was almost as weak as the stock portion.

A higher rate structure also has the potential to destabilize pensions since they have low cash holdings and must meet obligations, by selling investments bought at higher prices. You recently saw a pension crisis in England that caused the fall of a conservative government that was just elected. In fact, it was the shortest-serving government in British history.

Moreover, higher interest rates impact all debtors and all borrowers, not just the US Treasury. Private borrowers also have to refinance at higher rates and thus increased interest payments have to come out of corporate or household cash flow and are thus not available for other things. Ask any recent homebuyer how rising rates have increased monthly payments. Higher interest rates depress company profits. That is why rising rates tend to slow down economic activity.

Foreign governments are also borrowers and for those not well-financed, a generally higher rate structure could cause some defaults among those borrowers that don’t have a strong balance sheet.

Central banks around the world are raising interest rates to deal with the worst inflation in 40 years. That puts pressure on economies worldwide. The idea is that only a recession can relieve the pressure on inflation. That is not a very good policy option, is it? You basically substitute the pain of recession for the pain of inflation. Either way, you are inflicting pain on the citizens because governments spent too much money and central banks financed their excesses.

However, the recession itself creates another set of feedback loops with negative consequences. A slower economy causes a drop in tax revenues, making the deficit larger. That deficit must be financed either by borrowing more (increasing the supply of bonds and increasing interest rates) or currency debasement (inflation), which with some delay, results also in higher interest rates since borrowers want to be paid back in real inflation-adjusted terms.

Government revenue streams are tied to taxes collected and taxes collected are tied to economic activity. An unemployed worker or a shuttered business pays fewer taxes than before. This dependence can become extreme.  In California for example, 49% of income taxes are paid by 1% of the population.  That 1% is the stock and real estate speculators. So, the “everything bubble” created by the FED, drives government revenue. Pop that bubble and a lot of revenue dries up quickly, causing state and federal budgets to go into deficit. Those deficits have to be financed.

Besides causing tax revenue to drop, a recession triggers an internal flaw in the social entitlement welfare states of the US, Canada, and Europe. The worse the recession, the more people fall into the “social safety net.” This causes social expenditures to rise, right as revenue is contracting. This causes budget deficits to bulge everywhere, already aggravated by the previously mentioned problems in government finance.

It remains to be seen if the FED can continue to reduce its balance sheet and “pivot” with the growing decline in foreign purchases of US Treasury paper.  As the video below explains, US debt finance needs relative to global GDP growth creates some serious issues.