Now it’s new vehicles, restaurants, energy.  Game of Whac-A-Mole as some price spikes slow while others begin. But it’s a lot worse than it seems.

The CPI without the volatile food and energy components (“core CPI”) rose by 0.3% for the month and by 4.3% year-over-year. 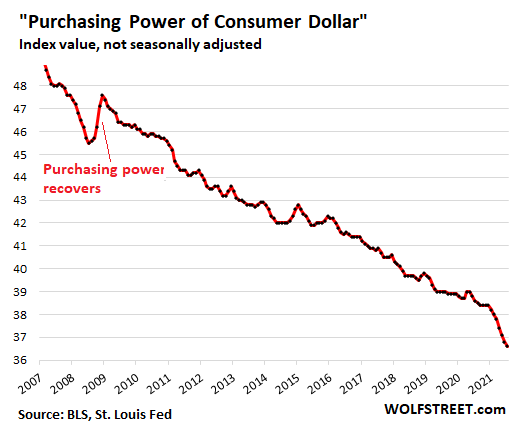 Homeownership costs and rents account for 31% of CPI. These are the largest categories, the most important categories, but they hardly budged despite exploding housing costs and thereby suppressed the CPI.

“Rent of primary residence,” which weighs 7.6% in the overall CPI, ticked up just 1.9% year-over-year despite the chaos going on in the rental market, as many cities experienced double-digit rent increases, while others experienced declines. Every month this year, it nudged up 0.2% from the prior month as if nothing had happened. This is the CPI for rent, which has dropped from the 4% range in 2019 to 1.9%: 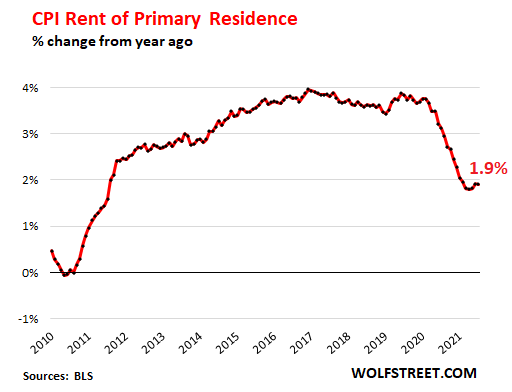 “Owners’ equivalent rent of residences” – the component that tracks the costs of homeownership and weighs 23.6% in the overall CPI – rose just 2.4% year-over-year despite the historic price explosion in the housing market.

The CPI’s homeownership component doesn’t track actual home-price inflation, but it is based on surveys that ask what homeowners think their home might rent for and is therefore a measure of rent as seen by the homeowner.

Meanwhile, back at the ranch, the national median price of existing homes spiked by 23.4% year-over-year, according to the National Association of Realtors.

The Case-Shiller Home Price Index, which tracks the price changes of the same house and is, therefore, a measure of house price inflation, spiked by 16.6% year-over year, the most in the data going back to 1987 (purple line). And yet, the measure for the costs of homeownership by the BLS barely budged (red line): 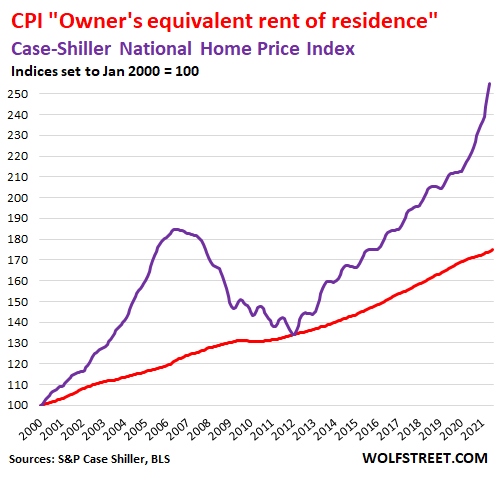 Energy accounts for 7.2% of the overall CPI. The spike was driven by gasoline, a surprise to no one who has filled up a tank of gas recently, which jumped 41.8% year-over-year. Natural gas jumped 19% year-over-year. The CPI for electricity service to the home rose 4.0% year-over-year…..