The market finally gets it: The Fed is going to tighten to get a handle on its massive inflation problem.

Since February last year, the hottest most hyped stocks, many of them recent IPOs and SPACS, have been taken out the back and brutalized, either one by one or jointly. The stocks that have by now crashed 60%, 70%, 80%, or even 90% from their highs include luminaries such as Zoom, Redfin, Zillow, Compass, Virgin Galactic, Palantir, Moderna, BioNTech, Peloton, Carvana, Vroom, Chewy, the EV SPAC & IPO gaggle Lordstown Motors, Nikola, Lucid, and Rivian, plus dozens of others. Some of these superheroes are tracked by the ARK Innovation Fund, which has crashed by 55% from its high last February.

This mayhem has been raging beneath the surface of the market since February last year, and in March, I mused, The Most Hyped Corners of the Stock Market Come Unglued. They have since then come unglued a whole lot more. But the surface itself remained relatively calm and the S&P 500 Index set a new high on January 3 this year because the biggest stocks kept gaining or at least didn’t lose their footing.

But now even the giants too are going over the cliff. Combined by market cap, the seven giants, Apple [AAPL], Amazon [AMZN], Meta [FB], Alphabet [GOOG], Microsoft [MSFT], Nvidia [NVDA], and Tesla [TSLA] peaked on January 3, and in the 13 trading days since then have plunged 13.4%. $1.6 trillion in paper wealth vanished (stock data via YCharts): 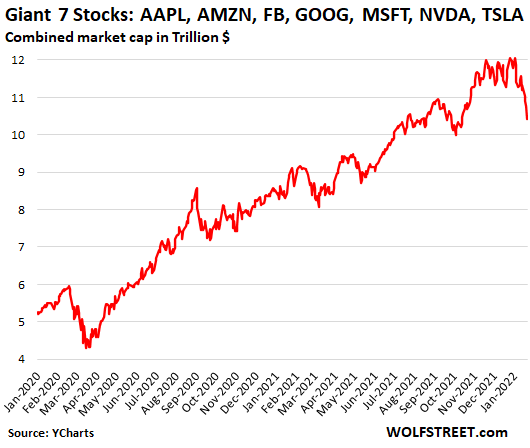 This is obviously still no big deal, a 13.4% decline, after this huge gigantic run-up. During the March 2020 crash, these giants plunged 28%. But it’s the first time since then that this unappetizing event has occurred.

And it has occurred because markets finally get it: Inflation is a massive four-decade problem for the Fed, and the Fed is about to lose, or has already lost, four decades of credibility as inflation fighter that Volcker was able to build. And so it is going to tighten to get this under some sort of control.

This tightening will consist of raising interest rates moderately, and by firing up Quantitative Tightening (QT), as the Fed governors explain at every chance they get. QT does the opposite of QE, and QE was responsible for driving up asset prices to these ridiculous highs.

And this notion of QT finally sank in – even among the biggest names…..

The GOP Hasn’t Suddenly Discovered Its Spine
Scroll to top