House prices spiked 16.6% from a year ago, the biggest increase in the data going back to 1987, according to the National Case-Shiller Home Price Index today, which was for the three-month moving average of closed sales entered into public records in March, April, and May. But in some cities, the raging housing mania produced far wilder results. The metros here are in order of the biggest house price inflation since the year 2000:

Los Angeles metro: Prices of single-family houses jumped 2.1% in May from April and 17.0% year-over-year. The Case-Shiller Indices were set at 100 for January 2000. With the index value for Los Angeles at 347 in May, house prices have soared by 247% since January 2000, despite the Housing Bust in the middle, which makes Los Angeles the most splendid housing bubble on this list. 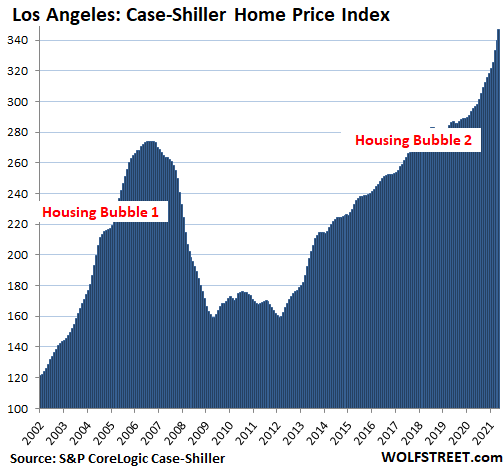 San Diego metro: The Case-Shiller index spiked 2.9% for the month and 24.7% year-over-year, the impersonation of the raging mania in the housing market. The year-over-year spike is the second hottest on this list, behind Phoenix. Prices in San Diego have skyrocketed 241% since 2000: 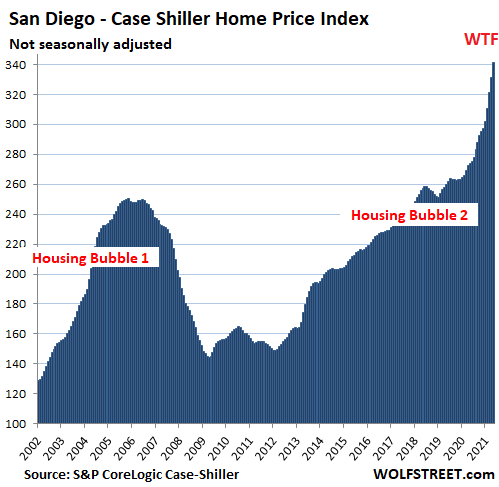 Sizzling “House-Price Inflation.” The Case-Shiller Index uses the “sales pairs method,” comparing the current sales price of a house to its price when it sold previously, and it includes provisions for home improvements. By tracking the amount of dollars required to buy the same house over time, the index measures the purchasing power of the dollar with regards to houses; it’s a measure of house price inflation.

All charts here are on the same scale as Los Angeles to show the relative heat of house price inflation in each market since 2000.

Seattle metro: House prices jumped 2.8% in May, and 23.4% year-over-year year, the third-hottest raging-mania annual house price inflation on this list. Since January 2000, house prices have soared 235%: 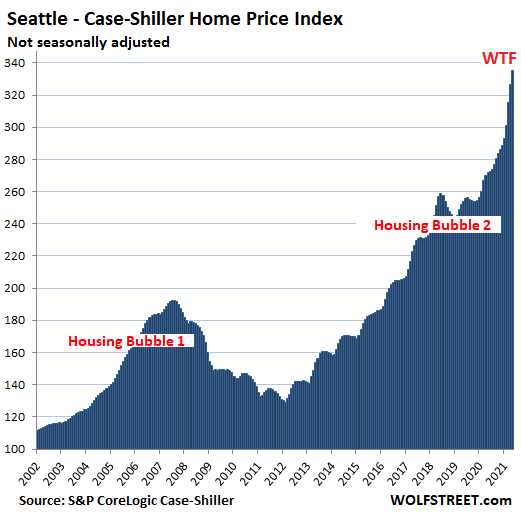 Condo prices, however, have been waffling along since April 2018, not going anywhere. Here’s my detailed look at this split in the San Francisco market. Condos are denoted by the red line. 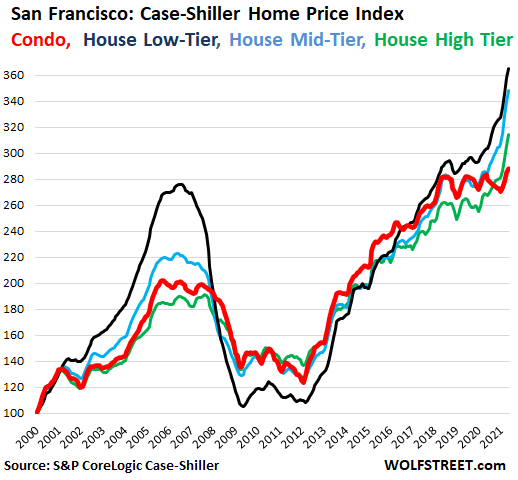 Can Socialism Ever Be ‘Democratic’? Here’s What Bernie Sanders...