Credit card balances ticked up 1.9% in March from February, not seasonally adjusted, to $1.036 trillion, according to the Federal Reserve today. Compared to three years ago, March 2019, the last March before the pandemic, this was up by only 3.0%.

In other words, credit card balances are now just 3% higher than there were three years ago, after three years of inflation, including raging inflation for the past 12 months that increased the prices of nearly everything that consumers buy with their credit cards.

Over the three years, during which credit card balances rose a total of 3%, CPI inflation jumped by 13%. In other words, even credit card borrowing cannot keep up with this raging inflation, LOL, and that their credit card debts, the most onerously expensive debt, are growing more slowly than inflation over the long term is for once a good thing for the American debt slaves: 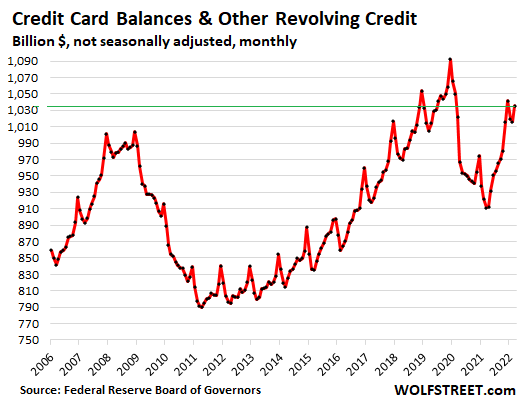 Note in the chart above how consumers paid down their credit cards and other revolving credit during the first 12 months of the pandemic, and then they started charging again, gradually getting back to where they’d been on a nominal basis, but never catching up with inflation and a “real” basis.

Consumer spending is very seasonal, and so is the usage of credit cards. Balances peak in December every year and fall off in January and February. Massive seasonal adjustments are used to smooth this out. In March, these seasonal adjustments added $62 billion to the revolving credit balance and pushed the figure up to $1.097 trillion, seasonally adjusted, up by 2.9% from February. 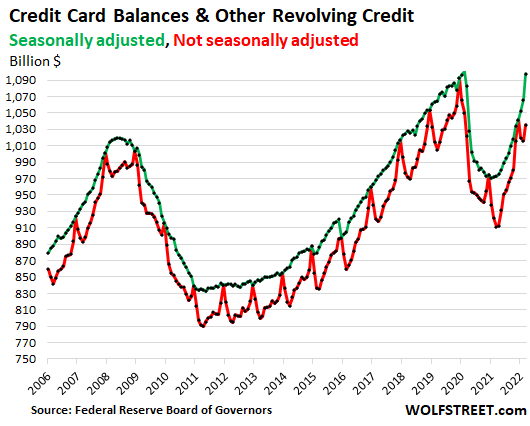 Auto loans and leases in the first quarter – this is quarterly data, not monthly – jumped by 1.6% from Q4 and by 7.6% year-over-year, to a record 1.34 trillion, according to the Federal Reserve today.